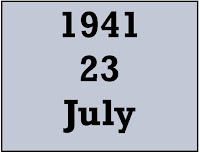 Today in 1941, Josef Jakobs left the comparative security of Latchmere House interrogation centre for an uncertain future at Wandsworth Prison.

MI5 had extracted what the could from Josef, and now it was time for the military justice system to take control of Josef, and his future.

Because Josef was a prisoner of the military, the cell in which he was held at Wandsworth Prison (F/3) was designated a military prison. Josef would be guarded by a detachment of Military Policemen under the command of the Deputy Provost Marshall of London District. The Governor of Wandsworth Prison noted in his journal that Josef Jakobs had been "received as lodger in F/3 (military prison)".

For a spy to be transferred to a civilian prison (or a military one for that matter) could mean one of two things: (a) he was being held for the duration of the war or (b) he was soon to be executed. For Josef, it would be the latter.