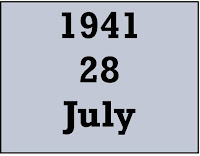 Today in 1941, Lt. Col. George M. Cornish of the Grenadier Guards oversaw the Summary of Evidence in preparation for Josef Jakobs' court martial. The event took place at Wellington Barracks on Birdcage Walk in London

The Summary of Evidence was a chance for the prosecution, in this case, Major Anthony A.H. Marlowe, to present the accused with all of the witnesses (and their statements). The accused, in this case Josef Jakobs, was given a chance to ask questions of the witnesses. He asked one question of the first witness but declined to question any of the other witnesses. There is no evidence that a defence attorney was present during the Summary of Evidence.

Based on the Summary of Evidence, Lt. Col. Cornish concluded that there was sufficient evidence to convene a General Court Martial.