Showing posts from November, 2017
Show all

A Wolf in Sheep's Clothing - Germany's Medium Bomber - Heinkel HE 111 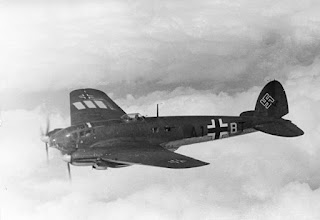 HE 111 - from wikipedia Last year, I wrote a post on the Heinkel 11 (HE 111) , an aircraft developed in Germany in the mid-1930s as a civilian transport machine. Given the prohibitions against rearmament placed on Germany after WW1, the designers of the aircraft did an end-run by creating an aircraft that could ultimately be used as a fast medium bomber during WW2. You can read my original post for more information on the HE 111's role in delivering spies over the shores of England. In this post, I want to share some videos I've come across that give a sense of the aircraft. The last flying version of the HE 111, a CASA 2.111 developed by the Spanish under license, was owned by the Commemorative Air Force and crashed in Wyoming in 2003 killing both pilots. Four actual HE 111's (not CASA 2.111s) remain (none flyable): one in Spain, two in Norway and one in Hendon, England. The first video - He 111 Heinkel Bomber Tour and Flight Demo - was filmed in 1997 and is
Post a Comment
Read more

Another Clue in the Hunt for Robin William George Stephens 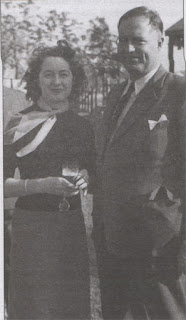 Joan Geraldine Pearson Dowling & Robin William George Stephens (from Camp 020 - Oliver Hoare) I had a comment on one of my Stephens blogs the other day from Stephen D. Stephen had tracked down a London Gazette notice dated 22 May 1942 relating to the second "wife" of Robin Stephens. It would appear that Joan Geraldine Pearson Dowling may not have married Robin Stephens, but simply undergone a legal surname change in 1942. This would explain why I have been unable to trace a marriage registration for Joan and Robin. Excerpt from the London Gazette - 22 May 1942 The Gazette entry states: NOTICE is hereby given that JOAN GERALDINE PEARSON DOWLING of 36 Grafton Street, Lincoln a natural born British subject intends after the expiration of twenty-one days from the date of publication hereof to assume the name of Joan Geraldine Pearson Stephens.—Dated 19th May 1942.      CHARLES ROBINSON and SON, 2, Lampton (042) Road, Hounslow, Solicitors. This discovery
Post a Comment
Read more

Worcestershire Constabulary Last month, I ordered the West Mercia Police files on the Bella in the Wych Elm case. The price was a bit steep but... the idea of actually being able to access historical documents on the case was too tempting. The archivist at the Worcestershire County Archives admitted that the files contained quite a bit of duplication. That is a bit of an understatement! So, here's what you get for £250... ITV Crimestalkers VHS recording - 1994 - 10 minutes   "Uses a mix of acted reconstructions, interviews with witnesses, still images, World War II film and commentary by Mr John Stalker to tell the story of the discovery of the remains of a woman's body in a wych elm in Hagley Woods and speculate on possible course of events which led to the woman's death. Reconstruction of the events surrounding the discovery of the body with interviews with Bob Farmer and Bob Hart, two of the boys who discovered the body. Exploration of the witchcraft
Post a Comment
Read more 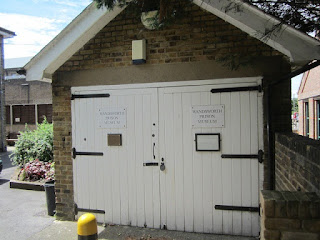 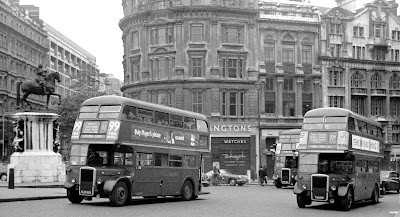 Bus #11 passing around Trafalgar Square ( London Bus Museum ) The title of this blog is a bit of a stretch... it's hard to say if Route #11 was the favourite bus of spies but it was definitely the route that showed up twice in the MI5 files (so far). When double agent TATE (Wulf Schmidt) radioed the German Abwehr in Hamburg that he desperately needed more money, they suggested a complicated rendezvous on Route #11 which involved Victoria Station. TATE replied that Route 11 didn't pass by Victoria (rather strange as it most certainly did) and suggested Route 16 instead. One of the bus tickets found in Engelbertus Fukken's possession after his death. (National Archives KV 2/114) Around the same time, in early 1941, undiscovered spy, Engelbertus Fukken was taking Route #11 from Liverpool Station to Ludgate Circus and back. The tickets for his journey were found amongst his possessions after his suicide in an air raid shelter in Cambridge in late March 1941. M
Post a Comment
Read more
More posts