Showing posts from April, 2018
Show all

Not so Incognito - German Spies and their Clothing 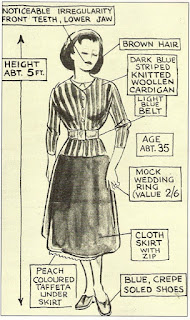 Diagram of Bella's clothing (original source unknown) In researching the Bella in the Wych Elm case, I've noticed that several commentators make much of the fact that the tags had been removed from her clothing. Some have suggested that her clothing may have been "seconds" from a market, while others have gone so far as to say that the absence of tags lends weight to the theory that she was a German spy. After all, spies cut the tags out of their clothing as part of their under-cover modus operandi. Didn't they? It's a nice theory, but does it really hold up in the case of Second World War espionage in the United Kingdom? What many fail to realize is that most of the spies thrown at Britain in late 1940 and early 1941 were poorly trained and poorly prepared. Even MI5 was perplexed that the oh-so-organized Germans could be sending over agents of such poor caliber. But Germany was desperate... and the agents who came over were often sent at bayonet point,
Post a Comment
Read more 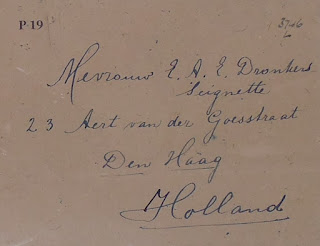 Envelope that contained Johannes M. Dronkers' farewell letter to his wife, Elisa A. E. Seignette in Holland. (National Archives - KV 2/46) A few years ago, I wrote a blog about the farewell letters of the executed spies in England. Those letters, written by condemned men on the day/night preceding their execution, were to have been delivered to their families after the Second World War. They never were. The letters sat in the files of MI5 and, when these files were declassified in the late 1990s, most of the letters were included in the release of documents to the National Archives. That has always perplexed me. Why could the letters not have been delivered? I might have found an answer. I was poking around the Imperial War Museum website and came across this note on enemy property. The Enemy Property Act extinguished all German interests, both copyright and ownership, in all material belonging to former German enemies (whether individuals or businesses) which was bro
Post a Comment
Read more 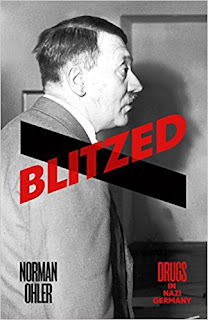 Blitzed: Drugs in Nazi Germany by Norman Ohler (cover from Amazon) The Book Blitzed: Drugs in Nazi Germany. Norman Ohler. Penguin Books. 2016 . Summary This book was originally published in German in 2015, translated into English for 2016, and I got my hands on a copy a few weeks ago. It's been translated into 25 languages and received rave reviews by numerous journalists. On the other hand, a fair degree of controversy has also swirled around the book. Some argue that the author, a novelist by trade, has taken some liberties with history and fictionalized it to such an extent that it is no longer accurate. The book examines the use of opioids, methamphetamines and other stimulants by the Germans during the Second World War. Pervitin, a methamphetamine, has a starring role, particularly during the Blitzkrieg invasion of France and the Lowland Countries in May 1940. Most of the author's focus lies with Hitler and his personal physician, Theo Morrell. Was Hitler a
Post a Comment
Read more

Adventures in Publishing - Rapid Expansion of the To-Do List 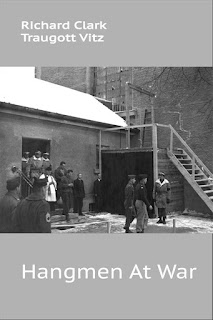 Hangmen at War - Richard Clark & Traugott Vitz - 2018 (from Traugott Vitz site ) A year ago, I reviewed an article by Traugott Vitz posted on Kriminalia Magazine online. The article, The Executioner at War: Soldiers, Spies, and Traitors, was an English translation of a chapter from Vitz's book Langes Seil Schneller Tod: Wie Grossbritannien seine Moerder haengte (Long Rope Quick Death: How Great Britain hanged its Murders). It was a fascinating article and I am halfway through Langes Seil; a slow read due to my rusty German. It's a fascinating book so far. This past week, Vitz let me know that he has published another book, this one in partnership with Richard Clark, the man behind the Captial Punishment UK site. Hangmen at War has been published in English (yay!) and is available online in its entirety . There is a chapter dedicated to Spies, Traitors and Saboteurs, in which Josef receives some attention. The following chapter addresses the issue of murdered Al
Post a Comment
Read more

A Publishing Deal for "Shoot Straight Tommies! - The untold story of Josef Jakobs, last person executed in the Tower of London

The History Press (UK) Great news! The History Press has agreed to publish my manuscript on Josef Jakobs! It's been a very long journey to reach this point, and it's not over yet. The manuscript is a bit of a ragtag thing at the moment with dangling footnotes, unincorporated notes and formatting issues. It needs an index, a table of contents, images, image captions and a few other things. Luckily, a friend and fellow author has been through the process twice - once with Amberley Press and once with The History Press, so I have a solid guide who is providing very (VERY) helpful advice as I begin this publication marathon. I am reminding myself that it is a marathon... not a sprint... so I need to pace myself and plug away at resolving the manuscript issues noted above. As I look farther down the road, I also see a fair bit of promotion and marketing in my future. But again... it's a marathon... not a sprint... and I need to keep my attention focused on the immediat
2 comments
Read more
More posts