Showing posts from June, 2019
Show all

The Spy in the Tower on Goodreads.com 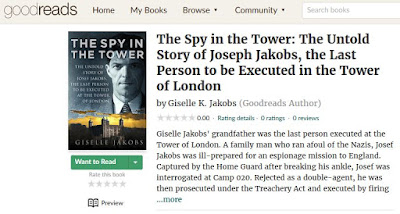 Screenshot of The Spy in the Tower's page on Goodreads If anyone out there has read The Spy in the Tower, might I ask you to please visit the book's page on the Goodreads site and leave a review. Amazon only allows "verified purchasers" to leave reviews on their site sooo... if people buy the book from the Book Depository... they can't leave a review on Amazon. Goodreads is a great alternative!! Thanks!
Post a Comment
Read more Was there a war-time spy ring in Birmingham, England? It's a topic that comes up quite frequently in the Bella in the Wych Elm story. The theory is that Bella was involved with the Birmingham spy ring, ran afoul of the leaders and ended up stuffed in the hollow wych elm. To date, however, I've never come across any solid evidence to support that particular theory. I was always perplexed as to where the theory originated, and had only ever come across it in Donald McCormick's book, Murder by Witchcraft . Donald McCormick - Murder by Witchcraft - 1968 Cover - Murder by Witchcraft - 1968 Donald McCormick I blogged about his book in regards to the Bella case back in May 2017 . McCormick told the tale of a stellar spy operating in the British Midlands... My next search was into any records which showed whether the Germans had successfully infiltrated their spies into the Midlands during the war. This proved both lengthy and in the main unrewarding. This was quite under
Post a Comment
Read more 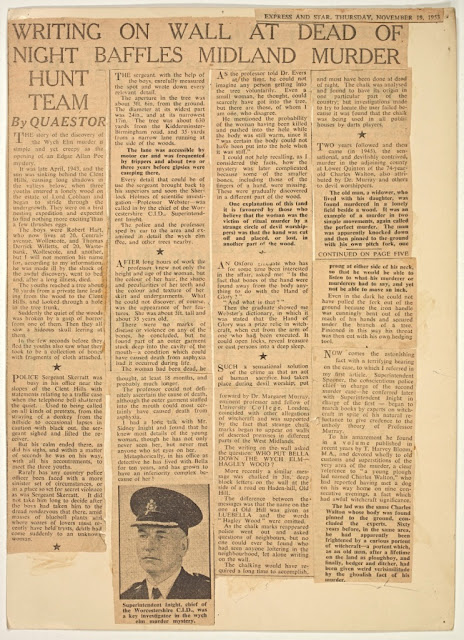 Recently, I've been in a back and forth email exchange with Pete and Alex Merrill who are working on their second volume of the Bella in the Wych Elm series. At least, I hope it's a series, their first book was fascinating and volume 2 promises to be even more so. We have been bouncing around ideas/thoughts/puzzlements about the articles written by Quaestor (a.k.a. Wilford Byford-Jones) in late November 1953. Here's the dilemma... did Quaestor write just two articles? Or were there three? The Worcestershire Police files have the following images of Quaestor articles (not arranged in chronological order in the file). Quaestor Article - Thursday 19 November 1953 The image appears to be a consolidated copy of Quaestor's article written on 19 November 1953 (as noted in the newspaper heading). The article touches on the discovery of the body in the wych elm and then veers into the witchcraft elements before bringing in the case of Charles Walton. Quaestor's article
Post a Comment
Read more

On the Trail of Kenneth Clifford Howard

A couple of years ago, I wrote a post about the notebooks belonging to Kenneth Clifford Howard - notebooks that now reside within one of Josef's files at the National Archives. There is no evidence that the notebooks belonged to Josef, nor that they should have been placed within his file. One of the notebooks mentions Karl Theodore Drücke and it is far more likely that they were originally placed within his file.  Indeed, file KV 2/1701 - one of Drücke's files - has a number of reports and letters that mention the notebooks and Kenneth Clifford Howard. That Security Service file is likely the one belonging to Lt. Col. William Edward Hinchley Cooke who often testified at the trials of would-be spies. My guess would be the notebooks slipped out of Drücke's file and were then erroneously placed within Josef's file - a simple clerical/filing error that is an annoyance and contributes to confusion! Anyhow... I am always chipping away at some of these lingering mysteries.
Post a Comment
Read more
More posts