Showing posts from March, 2020
Show all

Still chipping away at any clue for when Robin William George Stephens passed away. Stephens had served as commandant of MI5's Camp 020 interrogation centre during the Second World War and retired from the military in 1960 at the age of 60. I've investigated several dead ends and keep coming back to his second wife's death as a line of inquiry.

Joan Geraldine Pearson Dowling Stephens passed away in 1992 in Lincoln, Lincolnshire. Robin Stephens was already deceased at that point. The informant for Joan's death was her sister, Audrey Violet (Dowling) Richardson. Audrey passed away in 2005 and, a few years ago, I applied for her probate records (but apparently never blogged about it).

The executors of Audrey's estate were Andrew Francis Wright and Anne Margaret Mary Pennycook, both of Lincoln. Anne was also the chief beneficiary of Audrey's estate. Who were these individuals? Was Anne another sister of Audrey? Or were they cousins? 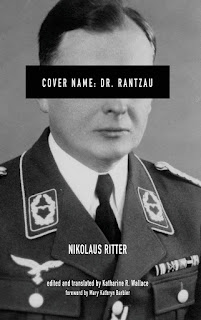 Overall, I'd say the translation was quite well done as Ritter's stuffed-shirt, patriarchal German personality comes through loud and clea…
Post a Comment
Read more

The Story of Roy Harrison - Executioner of a German Spy 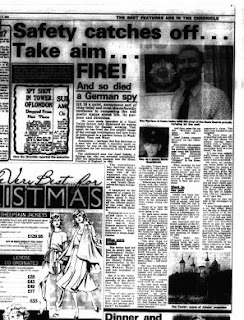 I bought a British Newspaper Archives subscription last year and did various searches for Josef Jakobs/Jacobs.

Imagine my surprise when I came across a 1987 article in which a man named Roy Harrison told the story of how he had served on the firing squad of Josef Jakobs!

I already had an eye witness account from one of the British Military Policemen who accompanied Josef to his execution.

I also had the Regimental Sergeant Major's hand-written instructions from the morning of the execution.

While I had tried to track down some of the members of the firing squad... they weren't easy to find.

Yet here was this interview with Roy Harrison! It doesn't always jive with the other two accounts and I note the discrepancies and/or inaccuracies in square brackets.

[Roy Harrison, a quiet man from Washington [Tyne and Wear, Country Durham], once made a macabre mark on history - he was on t…
Post a Comment
Read more
More posts