Showing posts from June, 2020
Show all

Arthur Albert Tester (at right) ca 1928 - the photograph shows his rather stout physique. Photograph given to the Metropolitan Police by the  Dutch Vice Consul. The other two men are Germans: circa 1928 - Professor Goldberg of Berlin (centre) and Frans [sic] Shiften [sic] of Starnberg near Munich (left) (MEPO 3895) We are following the story of Arthur Albert Tester, a larger-than life character who gained notoriety across Europe throughout the 1920s, 30s and 40s. In the first blog of this series , I outlined Tester's beginnings and how he managed to get into legal trouble in Germany, France and Belgium during the 1920s. Tester then made the leap to Great Britain where he made a name for himself, albeit not necessarily a positive one. Naldera, Broadstairs, Kent Despite filing for bankruptcy on 24 September 1930, Tester managed to purchase a large mansion in Broadstairs, Kent in 1931, a house known as Naldera. Tester apparently paid £6000 for the villa which had lain vacant since t
Post a Comment
Read more

Arthur Albert Tester ca 1923 (from Tester's MI5 file Kew) As noted in earlier blogs, I came across Tester's name while researching the individuals associated with the black market passport business in Berlin in the late 1930s. Tester's name came up as an associate of Josef Emil Roos and piqued my interest. A British banker who had infiltrated the British Secret Service? That sounded fascinating. When the National Archives at Kew offered all of their digitized files for free... I seized the opportunity to download Tester's files. There is a fair bit of information about Tester online, particularly on a couple of Romanian sites, as well as in historical newspapers. I wanted to sort fact from fiction and have to admit... it's been a bit of a struggle. Tester was a complex individual who was a professional liar, scoundrel and swindler. He always seemed to manage to stay one step ahead of the law, however, until he finally met his demise at the hands of a Romanian border
Post a Comment
Read more

Some more Leads on R.W.G. Stephens 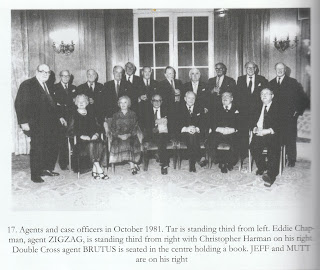 I had a couple of comments on one of my Stephens blogs, from an anonymous individual, which suggested a few more clues/lines of enquiry into establishing the date of death of Robin William George Stephens, former commandant of Camp 020. Figure 17 from Gentleman Spymaster by George Elliott (2011) Surviving double-cross agents and their case officers October 1981 One clue was a photograph in Geoffrey Elliott's book, Gentleman Spymaster: How Lt. Col. Tommy 'TAR' Robertson double-crossed the Nazis (2011). There are a number of photographs in the book, and photograph number 17 (facing page 167) is a group photo, taking in 1981, of surviving double-cross agents and their case officers. The anonymous writer notes that Stephens is not included in the photograph suggesting that he may have been deceased prior to 1981. As an aside, the photograph in Elliott's book has no source information whatsoever, neither in the photograph caption nor in the list of illustrations i
4 comments
Read more

Nazi Germany's Arrest List for the 1940 Invasion of England 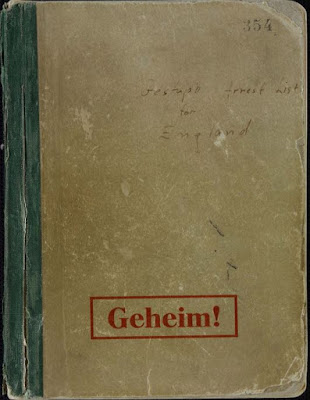 Cover of the Sonderfahndungsliste Grossbritannien aka Gestapo Arrest List for England aka The Black Book Whilst searching for information on Arthur Albert Tester and his shady associates, I signed up for a trial subscription to FindMyPast.co.uk. They appeared to have some info on Tester and I wanted to have a look at it. Imagine my surprise when up popped a record from the Gestapo's arrest list for their planned invasion of England in 1940! I had heard vague rumours of such a list but had never come across an actual copy before. Not surprising given that there are apparently only two copies of the booklet that survived - one at the Hoover Library in the US and one at the Imperial War Museum. Kudos to FindMyPast for scanning the Hoover Library copy and making it available online. Wikipedia has an article on this little booklet, under a heading called " The Black Book ". I've also seen it referred to as Hitler's Black Book, but either term really only deve
Post a Comment
Read more
More posts