Showing posts from July, 2020
Show all

The German Spy and the Lewisham Barrister 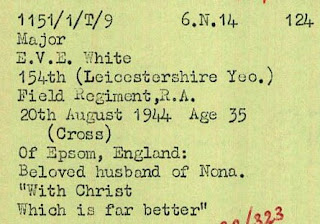 A few weeks ago, I received an email from Mike Guilfoyle, Vice-Chair of the Friends of Bockley & Ladywell cemeteries. I'm always amazed at how many diverse people find my blog and reach out. Mike was researching historically interesting deceased individuals with links to Lewisham (just southeast of London) and came upon my website and blog. As it turns out, Josef's defending attorney, Eric Vincent Ewart White, was born in Ladywell, Lewisham and Mike wrote a short piece for the Ladywell Live site . He did a great job of summarizing the story of Josef Jakobs and his defence attorney. Mike had hoped to dig up some more information on E.V.E. White but was unsuccessful. I had written a blog about White five years ago and include the link here for interested readers. Gravestone inscription for Eric Vincent Ewart White (from CWGC - Heliopolis Cemetery ) I did a bit more digging on Eric, just to see if I could turn up any more information. In my earlier blog, I had noted that he
Post a Comment
Read more

Sooo... given that someone successfully submitted an FOI request to the Metropolitan Police about Arthur Albert Tester... I thought... why not see if they have anything on Josef Jakobs. I did some digging and found the original MetPol file number for Josef's case and sent an email off to their FOI department a few weeks ago. Alas... here is their reply. Freedom of Information Request Reference No: 01/FOI/20/014842 I write in connection with your request for information, which was received by the Metropolitan Police Service (MPS) on 24/06/2020.  I note you seek access to the following information: Met Pol file on German spy Josef Jakobs - January 1941 to December 1941. Met Pol file 405/41/624. May have information on Lily Knips as well. SEARCHES TO LOCATE INFORMATION To locate the information relevant to your request searches were conducted within the MPS.  The searches failed to locate any records relevant to your request, therefore, regrettably the information you have requested i
Post a Comment
Read more 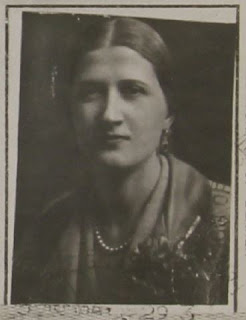 In the first three installments of this blog series, I looked at the life of Arthur Albert Tester, swindler and conman extraordinaire. (Part 1 is here , Part 2 is here , Part 3 is here ) In today's post, I'm going to sweep up the stories of what became of his two wives and six children. Interestingly, Tester’s birth was finally added to the register of British consular births for 1946-1950, retroactive to 1923 when he received his second (or possibly his first) British passport in Frankfurt am Main. His three eldest daughters, Violet, Margit and Mary, all born in Germany before 1923, were also listed in the 1923 and 1946-1950 consular births register which suggests that their births were not registered with the British consular authorities at the time of their births either. All of this activity in the consular births registers in the post-war period was likely triggered by Tester’s children trying to return to England and finding their path hampered by a lack of adequ
Post a Comment
Read more

By Giselle Jakobs - July 08, 2020
I received an email today saying that The National Archives at Kew were reopening on July 21... I had a bit of a panic attack about the digitized files... Because while TNA has been closed, all of the digitized files have been free... but when I actually read the email... I heaved a sigh of relief   I’m pleased to say that, for the time being, we will also continue to provide free downloads of our digital collection on our website, along with a huge number of research guides, resources and activities for the whole family to enjoy.   Excellent news! While I don't have any files on my to-be-downloaded list... that might change! More info on their site...
Post a Comment
Read more 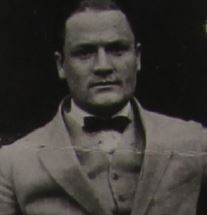 Arthur Albert Tester N.B. This is Part 3 in a four part series on Dr. Arthur Albert Tester: Part 1 can be found here Part 2 can be found here Part 4 link will be posted when it is out... There have been a lot of rumours and theories about how and when Arthur Albert Tester left England. One particularly glamorous story relates how Tester left the shores of Britain in August 1939, shortly before the declaration of war. According to the story... Tester trotted down the 39 Steps opposite his Broadstairs mansion and then scurried across the beach to be spirited away by a German submarine. The truth is not quite so James Bondish… Departing Britain Sometime before December 1938, Tester bought the SY Lucinda , a steam yacht (588 tons gross) for £7500 from B.L. Koppenhagen, Alton House, Bessborough, Roehampton. Some authors say that Tester used to entertain lavishly on his yacht and even hosted foreigners. This might refer to the SY Lucinda , but it could also be a reference to the Blue Bird ya
Post a Comment
Read more
More posts