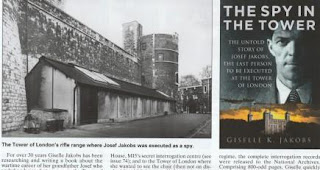 My journey to uncover the story of Josef Jakobs, my grandfather, really took off when I found the eleventh edition of After the Battle magazine in late 1980s. The two page spread on Josef in the magazine gave me way more information than any I had found to date. After contacting the editor, Winston Ramsey, a whole new world opened up. Winston took me on a tour of some of the sites in London associated with Josef and introduced me to Nigel West.

I sent Winston a copy of The Spy in the Tower last year and he said that "It really does stand supreme in the annals of Second World War history and is a wonderful tribute to your grandfather. You have told his story in the most detailed way and I can only guess at the countless hours that you have spent at the keyboard. Every little loose end is researched and I particularly liked your comments in italic in the court martial transcript. And what a good way of putting it all in perspective by telling the Richter story and that of the following agents."

Winston promised to write a piece for After the Battle for the May 2020 edition but, due to Covid-19, things got delayed a bit. A copy of After the Battle #188 arrived in the mail a few weeks ago with a note about the book. I am grateful to Winston for all of his assistance and support over the years!