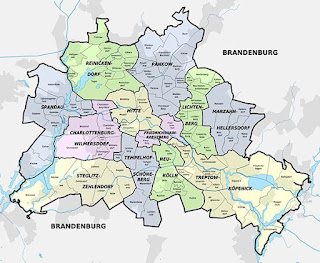 While searching Ancestry a few months ago, I noticed that the array of Births, Marriages and Deaths from Berlin had been expanded. Births were now available up to 1906, Marriages up to 1936 (formerly 1920) and Deaths up to 1955 (formerly 1935 I think). Quite a bonanza! I had high hopes of tracking down the death of Josef's sister, Maria Jakobs who, we think, passed away sometime between 1943 and 1952, but... no luck. It is always possible that she married during that interval or... that the family simply lost touch with her and that she lived far longer, but in isolation from the rest of the Jakobs family.

While I struck out in tracking down Maria Jakobs, I did take the opportunity to try and track down the fates of some other Berlin characters.

Several years ago I wrote a couple of blog posts on one of Josef's colleagues in the black market passport scam: Egon Clemens Pius Rammrath.

I ended one of the posts wondering: What became of Egon? Did he survive the war? I had found two references to articles written by an Egon Rammrath, one in 1946 and one in 1972. Was it him?

In sifting through the newly released Berlin death records, I came across a death certificate for Egon. His death was registered in Rüthnick, Ostprignitz-Ruppin, a small village northwest of Berlin and Oranienburg. The death informant was his daughter, Ursula Schwarz. This would suggest that despite getting divorced in 1922, only eight years after their marriage, Egon and his wife (Kätha Martha Olga Klinckmüller) must have had at least one child.

According to the death registration, Egon Clemens Rammrath, was a Makler (estate agent) living in Grieben. There is a village named Grieben west-southwest of Berlin but, I am more inclined to believe that the death registration refers to Grieben bei Gransee, a village northeast of Rüthnick. Egon died in his residence in Grieben on 24 September 1947 at 1:30 am. The cause of death was a heart attack. His parents were Franz Rammrath and Hedwig nee Heiden (matching what I had uncovered in the earlier blogs). Egon had been born in Berlin-Wilmersdorf at Konstanzerstrasse on 11 July 1891. According to the death registration, he was not married which was technically true as he was divorced. Egon was only 56 years old at the time of his death and I wonder at the intervening 10 years between 1937 and 1947. What did he do during the war?

I did receive a brief ping from a family member via Ancestry but I think they were a bit freaked out by Rammrath's rather dubious involvement with the black market passport scam.

At least one question can be answered... the publication from 1972 was definitely not that of our Egon Rammrath. And the earlier publication, from Das Lichtblick in 1946 is unlikely to be him as well. I found evidence of another Egon Rammrath living in Vienna in 1955 and 1965. Which just goes show that even such a unique sounding name as Egon Rammrath isn't so unique! Although Egon Clemens Pius Rammrath definitely is...

I did a post about Richard in the fall of 2020. He was one of Ziebell's clients who was to have received a forged Finnish passport via Algoth Niska. The whole scheme had fallen apart, however, when the entire passport ring, including clients, was rounded up by the Gestapo. We know that Richard survived the war and that he passed away in 1954. His death registration is now viewable on Ancestry.

Richard Eduard Wiener had been a "frühere Versicherungs-Sachverständige jetzige Rentenempfänger" (former insurance agent currently pensioner) living at Oberhaardter Weg 37 in Berlin-Grunewald. He died on 15 February 1954 at 7:30 am in Berlin-Wilmersdorf at Paretzer Straße 11-12, the address of Sankt Gertrauden Krankenhaus (St. Gertrude's Hospital). Richard had been born on 12 March 1876 in Berlin and, according to the death registration had married Walli Berta nee Kupzok on 18 April 1953 in Berlin-Schmargendorf. Given that their marriage was also registered in London in 1923, one wonders if perhaps their English marriage hadn't been recognized in Germany. The death informant was the head of Sankt Gertraude Krankenhaus. Richard's cause of death was: "wirbelsäulen-tumor, querschnittslähmung, herz und kreislaufversagen" - essentially a spinal tumour with paraplegia and heart and circulatory failure. He was 76 years old.

The lovely caberet singer, and Josef's mistress, Hedwig Clara Bauerle, passed way in Berlin in December 1942. And her death registration is now available via Ancestry, for those who have a subscription... So much easier than when I was trying to track it down!

Lily (nee Katz) Sauer had married Franz Lorenz Knips in 1926 in Berlin. Lily was the woman who would later toy with the idea of purchasing a visa or passport from Ziebell but whose son managed to whisk her away to London in early 1939. Both Lily and Franz were divorced but appeared to have a short, but happy marriage. Franz passed away on 27 June 1935 at the age of 51. Franz was Catholic and had been born in Fulda on 21 July 1883 to Rudolf August Maximillian Knips and his wife Gertrude Therese Albertine nee Kramer. Franz had married Anna Margarete Lötzsch and, before they divorced in 1925, produced at least one child, Hildegard Maria Theresia Knips Given that Hildegard was born on 9 May 1913 and that her parents had only wed a scant 2 months earlier (15 March 1913), one can presume that the marriage was a hasty affair.

During her questioning by Special Branch and MI5, Lily Knips had noted that she had lost contact with her step-daughter, Hildegard Maronn. I did track down Hildegard's marriage on 11 February 1935 to Feodor Franz Waldemar Maronn. The couple had several children, at least one of whom died as a young child (born 1938, died 1939).

I also took the opportunity to see if Lily Knips' sister, Elsa (nee Katz) Majewski had ever finalized her second marriage to Walter Georg Heinrich Gross in 1919 in Berlin. The marriage had not gone through because both parties failed to appear in front of the Standesamt at the appointed time and place. With the Berlin marriages now open to 1936, I can now report that I didn't find any other marriages for Elsa.