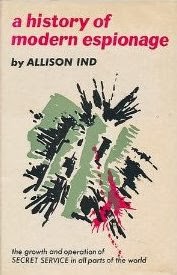 A History of Modern Espionage: the growth and operation of Secret Service in all parts of the world, Allison Ind, Hodder & Stoughton, London, 1965.

Review
One of the first books to mention Josef Jakobs was published in 1965 by Colonel Allison Ind, a US Air Intelligence Officer who had been station in the Far East during World War 2. Ind wrote a book entitled A History of Modern Espionage. The book was clearly an ambitious project given the broad scope of its subtitle: "the growth and operation of Secret Service in all parts of the world".

Thus it is rather surprising that Josef Jakobs, a rather unimportant spy in the grand scheme of things, gets mentioned within the pages of the book. It is also worth noting that the story of the Double-Cross System in England had yet to be told (Masterman's book was not released until the mid-1970s). Colonel Ind had this to say about Jakobs:

Far less accomplished types were among those who did fall into Special Branch's net, as well as the "fillers" with whom Berlin desperately and sometimes recklessly tried to stop the espionage gap created by the two-net haul in 1939.

There was, among others, the hapless Josef Jacobs. The poor chap could not even speak English, except in mangled phrases heavy with gutturals. Ill luck dogged him from the moment he set foot on English soil. Unfortunately for him that setting was rather violent and resulted in the fracture of his ankle: he had landed too roughly in an English potato field from the aircraft that had flown him across the channel in mid-1941. Despite the pain, he had sought to ply the trowel that was part of his equipment to bury the tell-tale parachute. But waves of nausea swept over him and robbed him of his strength. He could not finish the job, although he did manage roughly to conceal a pack containing a radio transmitter and some meteorological data. Then he collapsed. After daylight a farm worker passing along the road above the spot heard moaning. The farmer was more than mildly surprised at sight of the man lying there, clad in a helmet and a grey overcoat, but beneath it a grey business suit and, of all things, spats! A brown bowler hat had proved more indestructible than his ankle. But he was in no mood, or position, to wear it. He tried to put into words an explanation. It was so badly phrased that the farm hand knew immediately that his puzzle-man was a foreigner. He notified the police.

On Jacobs was found a British ration book, neatly enough accomplished, a loaded pistol and a considerable sum in one-pound notes. He had food enough to sustain him for a few days, including German sausage, no less.

In view of all this, his clumsy attempts to deny espionage intent were pathetic. But a man clings to any straw in a fight for his life. Jacobs resigned himself to the inevitable in a short time, explaining that he was not a professional spy but a member of the German Wehrmacht meteorological service who had been sent to England to set up his own weather-observing station and transmit the results to Germany. Doubtless his findings would have been of considerable use to the Luftwaffe, and quite possibly the invasion planners.

His otherwise undistinguished record shows that he was the only German spy of the period to be shot, rather than hanged, an acknowledgement of his military status.

Colonel Ind got the broad-brush strokes of Jakobs' story correct, although some of the details are incorrect. Jakobs came across in late January 1941, not in mid-1941. He covered himself with the parachute during the night and did not try to bury it. He was spotted by two farmers after firing shots into the air. He was found with a trilby hat, not a bowler hat. Interestingly, Ind gives no information on the location of Jakobs' capture and/or execution.

Summary
Colonel Ind's account, probably based on contemporary newspaper accounts and/or anecdotal stories, is noteworthy primarily for being one of the first accounts to mention Jakobs. It has since been supplanted by numerous other books that reference additional, and more accurate, resources.

Review Score
2 out of 5 - The overall account is moderately accurate.