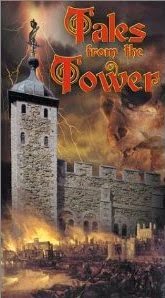 The Film
Tales from the Tower was released in 2001 by Ardent Productions, a film company based in England. It was produced for the American market and aired on The Learning Channel.

Writers: Daniel Diehl and Mark P. Donnelly (who later published a book with the same title in 2004).

N.B. This video should not be confused with the National Geographic production, Bloody Tales from the Tower, released in 2012, which was an excellent production.


Background
The three-part documentary series did not receive favourable reviews. This was not altogether surprising given that Ardent Productions had a reputation in the British independent film industry as a "sad-joke" (The Guardian). Shortly after In 2002, Prince Edward resigned from the company and in 2009, Ardent Productions liquidated its assets. Investors who had pumped more than £2 million into the venture, were left with £40.

Transcript & Video
I purchased the VHS version of the series but was unable to convert it to a computer-readable format. With the DVD version of the series unavailable in Canada, I recorded the Jakobs segment using my video camera, for the purpose of critiquing it. The entire series was not reviewed in its entirety, only the section on German spy, Josef Jakobs.

I have provided a transcript of the video narration below, along with a link to the video on Youtube. A review of the video is available here.


If the above link to YouTube does not load - click here to go to the video directly.

Video Transcript of Tales from the Tower

After nine centuries as Britain’s most notorious fortress and prison, the Tower now plays a far friendlier role. Today it’s only captives are millions of tourists who come to see the magnificent Crown Jewels and thrill to lurid tales of historical mayhem gleefully related by the Tower Warders.

But the Beefeaters were shocked one day in 1991. After a tour of the ancient blood-soaked alleys of the Tower, a middle-aged woman stepped out of the crowd. She approached the guide and asked quietly, “Can you show me the place where they shot my father?” The woman’s question revealed the tragic story of her father, the last man to be executed in the Tower.

Her father was Josef Jakobs, a German spy who was supposed to help guide enemy planes over England during World War 2. To ensure the skies were clear enough for Nazi planes to find their targets, the German Air force needed constant updates on the unpredictable English weather.

1:09 – Introduction to Josef Jakobs
(images of Jakobs being trained & as a dentist)

The only way to obtain this information was to have it transmitted out of England by German spies. Spying is dangerous work and most spies are highly trained professionals. But Josef Jakobs was a poorly trained amateur, a pawn in the deadly, ruthless game of wartime intelligence. Jakobs was a dentist and had already served in the German military in the First World War, but at the age of 42 he was again drafted into the German Army.

In a bureaucratic blunder, Jakobs was ordered into the German Secret Service. He was given three weeks training in radio communication and meteorology but he received no special training as an espionage agent. Jakobs was considered expendable.

Jakobs was supplied with a radio transmitter hidden in the briefcase, road maps of Great Britain, a set of false identity papers and a pistol. With these simple tools, the dentist would be air-dropped into England to establish a clandestine weather service. In the heart of enemy territory, the amateur spy was to radio regular reports to Nazi headquarters.

Slipping into British air-space under the cover of darkness, Jakobs parachuted into Huntingdon, England in January. Not only was Jakobs not a spy, but the dentist had little experience as a paratrooper.

He landed in a farmer’s field and shattered his ankle, a painful and immobilizing injury, it would prove to be his fateful Achilles’ heel and his undoing as a novice spy.

3:07 – Terrorizing the Farmer’s Wife
(scene set in a farmyard and a mature forest with ferns)

He tried to escape and painfully hobbled to the nearest outbuilding. Hungry and tormented by his injury, Jakobs surprised the farmer’s wife. Terrified, she tried to raise an alarm. Trying to silence her, Jakobs pulled his pistol and limped after her.

Hungry, in terrible pain, exhausted, Jakobs dragged himself back to his landing site. He fired his pistol to attract help. A farmer working nearby heard the shots and discovered the unlikely sight of a parachute spread across the middle of his field. When he went to investigate, the farmer found Jakobs lying unconscious beside it.

Taken into custody by local police and army reservists, Jakobs denied that he was working for the Germans. Did he think they would take pity on him? Did he think his cover story would work?

History never recorded his thoughts, though we know that he had been caught red-handed. He had a Luger pistol, radio transmitter, forged identity papers and a map showing the location of two nearby airfields.

5:33 – Reservists load Jakobs into a military jeep
(scene set in treed field with a jeep)

By now Jakobs’ injury was so bad that the reservists had to put him on a stretcher before driving Jakobs to London to await his fate.

After his ankle was set, Jakobs was transported under military guard to a maximum security London prison for captured spies and saboteurs.

6:27 - Military Court
(scene set in a dark room before a panel of three military officers)

The hapless dentist appeared before a military court to be tried under strict wartime secrecy. During the trial, Jakobs claimed he was actually a native of Luxembourg and helped Jews escape from Germany. He said he was sent to a concentration camp because of his anti-Nazi activities. Jakobs said he only offered to become a spy so he could get out of Germany and join the anti-Nazi underground.
But the claim to be escaping from Nazi Germany was a cover story used by all German spies, and an investigation showed Jakobs charged huge fees to help Jews escape Germany. His military service in the First World War proved he was German, not a citizen of Luxembourg. Swiss police records indicated he had been imprisoned in 1924 for selling counterfeit gold.

Josef Jakobs was convicted as a spy and saboteur and was sentenced to death.

During the Second World War spies were normally hanged in the prison where they were held, but Jakobs couldn’t stand at the hangman’s gallows because of his shattered ankle. The dentist would have to be shot by a firing squad.

7:44 – Jeep drives Jakobs to the Tower of London
(scene set in a Jeep in the countryside)

The agony of the incompetent spy was further prolonged when the arrangements for his execution had to be changed. Jakobs prison did not have a military firing squad. The crippled prisoner had to be transported to the Tower of London where soldiers on active duty could do the job. So the condemned German spy was moved to the ancient cells of the fortress to meet his fateful appointment with history.

8:14 – Arrival at the Tower
(scene set before a red brick building with fields in the background)

At 7:00 in the morning on August 15, 1941, a truck carrying the crippled dentist spy wound through the Tower’s maze of alley-ways. The truck stopped at an indoor rifle range on the outskirts of the Tower’s properties. As Jakobs was carried out, a guard pinned a small black target over his heart.


8:41 – Rifle Range
(scene set in what looks like a farm outbuilding)

Piles of hay were stacked along the back wall to catch the bullets. In front of the hay was a wooden chair. Jakobs was tied to the chair. An officer removed Jakobs’ glasses and covered his head with a black hood.

The firing squad, six members of the Scots Guards, filed quietly across the entrance of the rifle range. Each solider carried a Springfield rifle. In the tradition of firing squads, one rifle was loaded with a blank cartridge. This gave comfort to each rifleman on the squad – there was a chance had not fired the fatal shot.

9:30 – Execution
(various images of Jakobs the Tower and the chair)

At 7:12 am, August 15, 1941, the order of “Fire” was given and Josef Jakobs was executed. The German dentist who became a spy entered the history books as the Tower of London’s last victim.
Like some implement of medieval torture, the bullet riddled chair in which Josef Jakobs met his fate, still survives. Kept as an historical artifact, the chair remains safely in storage. It will stay hidden until it no longer haunts the descendants of Josef Jakobs, the last victim in the long and tragic history of the Tower.