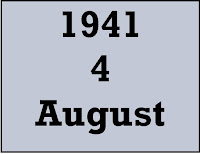 Today in 1941 - August 4 - The First Day of Josef Jakobs' Court Martial took place at the Duke of York's Headquarters (Chelsea).

Under the supervision of the Deputy Provost Marshal, Josef was brought to Chelsea from Wandsworth Prison by the Military Policemen who had been assigned to guard him.

On the first day of the court martial, witnesses for the prosecution gave their testimony: the farmers who found Josef, members of the Home Guard who apprehended him and members of the Huntingdonshire Constabulary. Lt. Col. Hinchley Cooke (MI5) and a radio expert also testified. In the afternoon, Josef went to the stand and gave his testimony. Court was adjourned at around 5 pm during the prosecution's cross-examination of Josef.