Showing posts from July, 2017
Show all

The Mystery of the Red Barns in Norfolk 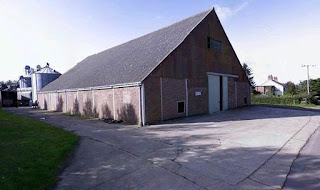 I came across a few interesting news articles from 2015 that, while a bit far afield from the story of Josef Jakobs, are intriguing nonetheless (see links below). The stories centre on some Dutch farmers in Norfolk who were apparently building secret airfields and hangers for Germany's invasion of England. Barn built by Dutch farmers in Norfolk (from Daily Express article ) For 4 years, commencing in 1936, Dutch farmers of the East Anglian Real Property Company had been building huge barns and apparently preparing fields to serve as air strips for the German invasion. The RAF, on the hunt for new air strips in 1940 saw that all the likely looking sites were already occupied by suspicious barns with red roofs, chicken coops in the shape of swastikas and fields devoid of crops. The Dutch farmers were all rounded up, arrested and interrogated. While some newspaper articles call them "spies", this seems highly unlikely as all were later released. Although... some news
Post a Comment
Read more

Marking the Graves of World War I Spies in England 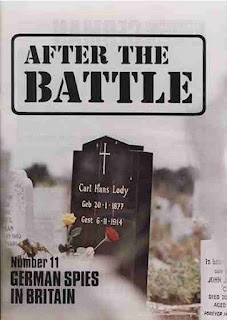 After the Battle Magazine - Volume 11 A number of spies were executed in England during World War I, most of them were shot at the Tower of London, and one, Robert Rosenthal was hanged at Wandsworth Prison in July 1915. Carl Hans Lody was the first spy to be caught and executed. He was buried in the East London Cemetery in 1914. For decades, his grave was unmarked. In the early 1970s, his descendants placed a marker on his grave (see cover of After the Battle magazine - Volume 11 - at right). The other spies who had been executed in the Tower were also laid to rest in the East London Cemetery, but none of their graves received individual markers. According to After the Battle magazine: "Only the grave of Karl Lody can be seen today--the other bodies, buried by the State in common graves, have since had other remains buried above them, the ground having been used several times. When the Volksbund Deutsche Kriegsgraberfursorge, the German War Graves Commission, were p
Post a Comment
Read more 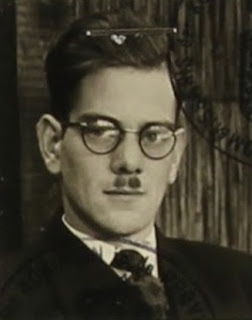 Engelbertus Fukken (alias Jan Willem Ter Braak) (National Archives KV 2/114) There's been a flurry of activity around Jan Willem Ter Braak the last couple of weeks. The media has learned that a gravestone is going to be placed on his grave and there have been a couple of articles that have come out. The Cambridge News and the Daily Mail have similar articles that both mention my website and blog (even quote it!)... although both call it a Dutch website... which it most certainly is not. I did contact the author of the Daily Mail article regarding the error... but we'll see what comes of that. The Mirror has an article on Ter Braak as well - but no mention of Josef Jakobs or this website/blog. On another note, I was contacted by ITV Anglia via Skype and answered a few questions about Ter Braak. It would seem that there is more interest in the stories of the wartime spies. I'm also becoming aware that while I have a fair degree of knowledge about German espionag
Post a Comment
Read more
More posts