By Giselle Jakobs - September 18, 2017
A couple of blogs ago, I introduced another notebook mystery from the files of German spy, Josef Jakobs. During his court martial on August 4 and 5, 1941, Josef was presented with a notebook, contained in a wallet, which apparently contained dates, times and locations of possible assignations with other German agents.

I initially thought this topic would be one blog but... as I delved deeper into the details of the story, the blog kept getting longer (and longer). The threads of the tale have taken me into the files of TATE as well as Jan Willem Ter Braak and opened up some intriguing possibilities. But, I digress... in the first blog, I ended with four questions:
In the last blog, I tracked the notebook, as best as we can at this stage of the game. We do know that there is a notebook in Josef's court martial exhibits file (KV 2/27). What we still don't know is where it came from since it is mentioned in none of the possessions with which Josef arrived in England.

The next question... Why was Josef never interrogated about the contents of the notebook during his time at Camp 020?
2. Camp 020 Interrogation
Given how thoroughly Major Stephens and his crew interrogated Josef from February 2 to July 23, 1941, it is rather surprising that they never questioned him about the notebook. This is understandable, however, when one realizes that the notebook was not included in any of the lists that documented the possessions and objects which were discovered upon Josef at the time of his capture and arrest. The officers at Camp 020 simply did not know that there was a notebook with suspicious information that could be an interrogation topics.

There is, however, one passing reference to a notebook in the KV 2/25 file - folios 96b and 96c. On June 23, 1941, Lt. George F. Sampson was interrogating Josef about his time in Hamburg and The Hague.

"Asked the address of the Dienststelle at Hamburg, JAKOBS said it was in General Knochenhauerstrasse and he believed the telephone number to be 221692. When he asked for this number, the reply was "Generalkommando", and he then asked for Dr. Beier. JAKOBS stated that MALTEN gave him the telephone number of the Diesnststelle at The Hague, and he said that he believed he had put it down in a small notebook that he brought with him."

Sampson must have perked up his ears at news of this notebook, one that might contain the contact information of the Abwehr offices in Hamburg and/or The Hague. But... at the bottom of his report, Sampson noted: "There was no notebook among JAKOBS' effects."

Memos began to fly and the next day, Josef was hauled back in for another session with Lt. Sampson. 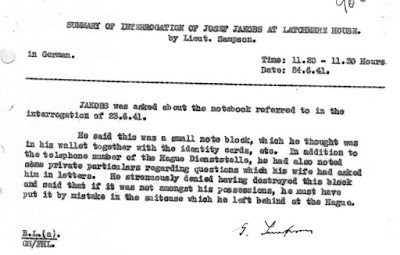 "JAKOBS was asked about the notebook referred to in the interrogation of 23.6.41.

He said this was a small note block, which he thought was in his wallet together with the identity cards, etc. In addition to the telephone number of the Hague Dienststelle, he had also noted some (?) private particulars regarding questions which his wife had asked him in letters. He strenuously denied having destroyed this block and said that if it was not amongst his possessions, he must have put it by mistake in the suitcase which he left behind at the Hague." 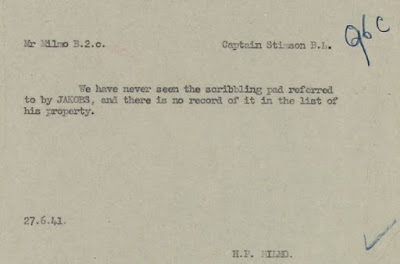 "We have never seen the scribbling pad referred to by JAKOBS, and there is no record of it in the list of his property."

Thank you Mr. Milmo, we have come to the same conclusion as well. There is no record of the notebook in Josef's possessions. The interrogation of June 23, 1941, is the first time it is mentioned and, after this short flurry of follow-up interrogation by Sampson and memo from Milmo, there is no further mention of it. And yet, one month later, it was being added to the list of exhibits for Josef's court martial. Which is baffling to say the least. Some possibilities come to mind:


There is a gap of a month between June 23 and July 23 (1941) during which the notebook went from being "missing" to being "found". There are no further mentions of the notebook, nor its contents, in the KV 2 files on Josef Jakobs. Once it was found, it is quite likely that Stephens and Sampson would have interrogated Josef in more detail about it and its contents. If Josef was as up front with them as he was at the court martial, they may have wondered who he was to meet. Was it one of their Double Agents? Was it an unknown agent?

Before we take a look at possible conspirators, the next blog will examine the contents of the notebook (at last!).