In 1984, I took parachute training and jumped out of an aircraft. It was the most terrifying experience of my life, and the most exhilarating. It also came with a fair degree of preparation.

My parachute jump would be with a static line. The rip-cord of the main parachute is attached to the aircraft with a static line which deploys the parachute. During 6 hours of Ground School, we learned: how to exit the aircraft safely by arching our body, how to check if our main chute had deployed, how to release the main parachute (in case it deployed incorrectly or in case we landed in the river), how to pull our emergency parachute ripcord, how to use the steering toggles on the parachute (mostly for rotation) and, most importantly, how to land correctly. Watching YouTube videos, one might be tempted to think that landing via parachute is a light and easy thing. It is not.

Here's an example of a soft landing with a RAM parachute.


Expert parachutists can use the toggles to flare just before landing, which reduces their speed, and allows for an elegant and light touchdown. It is a tricky procedure to perform correctly and only works with RAM parachutes (square/rectangular parachutes), which were only developed in the late 1960s. During World War 2, paratroopers and espionage agents like Josef used round parachutes, which are much less maneuverable than RAM parachutes. The landing is also much trickier.

Here's an example of a bad landing...


Here's an example of a better landing...


In order to land safely with a round parachute, one must practice the five point parachute landing fall. As you approach the ground, feet are together, knees slightly bent, grasping the risers with your hands. As you land, you tuck your elbows along the side of your body, throw your body sideways and roll so that your body contacts the ground in the following order: balls of feet,side of the calf, side of the thigh, side of the hip/buttocks, side of the back. Basically, you're trying to land on your major muscle groups - your soft, padded bits. It doesn't look elegant but executing a correct parachute landing fall helps to prevent injuries to feet, ankles, legs, hips, or upper body. It is actually quite counter-intuitive. Often, when we trip or fall, we instinctively react by trying to reach out and brace ourselves with our arms or legs. Hence the number of broken wrists and elbows in the winter when icy sidewalks make their presence known. 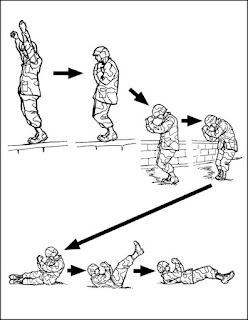 During my Ground Training, we spent quite of time practicing how to throw ourselves from a level standing position to the ground, practicing the five point contact rule. Once we were comfortable with that, we stood on the tail-gate of a pick-up truck (about 3 feet off the ground) and jumped onto the ground as if we were landing with our parachute. In actual fact, landing with a round parachute is more like jumping from shoulder height onto the ground. Still, it gave us a sense of the jarring force of contact with the ground and the importance of the five point throw and roll maneuver.

After Ground Training, we were loaded into a small aircraft, something like a Piper Super Cub. Once we reached the drop altitude (about 5000 feet), the instructor opened the modified door and called each of us forward. In order to exit the aircraft, a static line was connected to the main ripcord on my parachute, I then braced myself in the doorway, leaned forward and grasped the wing strut and let my feet leave the safety of the aircraft. I was essentially hanging off the wing strut, floating horizontally in the slipstream. My instructor gave me the thumbs up and I let go of the wing strut. The static line deployed the canopy very quickly and a quick glance convinced me that it had deployed properly. I swore the whole way down. As I saw the ground approaching, I got into the landing position: legs tight together, knees slightly bent, hands holding the risers. The landing was much more jarring than jumping off the pick-up tailgate! But I managed a safe five point landing and broke no bones, although I did have some bruising.

This video of a round parachute landing gives a bit of a sense of what it's like. The landing piece starts around 2:20 into the video and gives a good sense of the speed with which one approaches the ground.


Now... here's the thing. The German Abwehr somehow seemed to believe that their espionage agents could be successfully parachuted into England despite the fact that they:
How did the parachute spies from 1940/41 make out?
After Richter's arrival in May 1941, the Abwehr turned to other avenues to send spies to England, with one exception. In October of 1943, Nicolai Hansen parachuted into the Scottish Highlands from Norway. He eventually ended up at Camp 020 and told the MI5 officers that, in preparation for his mission, he had been taken to an airfield where he dressed up in full parachute gear and made several practice jumps from two tables stacked on top of each other. According to Hansen, his arrival in Scotland was a "perfect landing". It would seem that Abwehr handlers in Norway were more mindful of the benefits of parachute Ground Training for their agents.