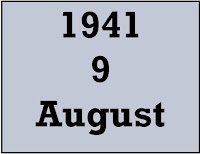 Josef had begun to craft his petition after his court martial found him guilty on August 5 and condemned him to death. By August 8, the petition was wending its way through the military, legal and political channels. It passed by the Judge Advocate General, the Director of Personal Services and the Secretary of State for War.

On August 9, the petition was forwarded on to King George VI. Would Josef's "humble petition" make a difference?