Nazi Germany's Arrest List for the 1940 Invasion of England

By Giselle Jakobs - June 03, 2020
Whilst searching for information on Arthur Albert Tester and his shady associates, I signed up for a trial subscription to FindMyPast.co.uk. They appeared to have some info on Tester and I wanted to have a look at it. Imagine my surprise when up popped a record from the Gestapo's arrest list for their planned invasion of England in 1940!

I had heard vague rumours of such a list but had never come across an actual copy before. Not surprising given that there are apparently only two copies of the booklet that survived - one at the Hoover Library in the US and one at the Imperial War Museum. Kudos to FindMyPast for scanning the Hoover Library copy and making it available online.

Wikipedia has an article on this little booklet, under a heading called "The Black Book". I've also seen it referred to as Hitler's Black Book, but either term really only developed after the war. The official title of the book was Sonderfahndungsliste G.B. ("Special Search List Great Britain").

It had been pulled together by the Nazi SS and specifically by the RSHA. While FindMyPast calls it a Gestapo list, I'm not entirely sure that is accurate. While the word "Gestapo" seems to be a handy catch-all term for anything associated with the Nazis, they were actually only one branch of the RSHA. Authorship of the booklet is usually ascribed to Walter Schellenberg of the Sicherheitsdienst (SD) (RSHA Amt VI).

The booklet contains the names of over 2800 British nationals and European exiles, including such prominent individuals as Winston Churchill and Sigmund Freud. If any of the people on the list were encountered after the invasion, they were to be arrested and handed over to the relevant branch of the RSHA, as listed behind the individual's name. RSHA Amt II, for example, had to do with Ideological Investigation, and they would have loved to get their hands on Sigmund Freud.

I had a quick scan through the alphabetical listing of names to see if I recognized any of them. There were a few interesting occurrences... and some notable absences...

I came across this entry for Lady Violet Bonham-Carter and, as a Harry Potter fan, wondered if this individual was at all related to the actress Helena Bonham-Carter (who plays Bellatrix Lestrange in the Harry Potter movies). Turns out, Violet was Helena's grandmother and was wanted by the RSHA VI (Foreign Intelligence). Violet was an out-spoken anti-fascist campaigner, an opponent of appeasement and a steadfast friend of Winston Churchill. No wonder she was on the RSHA list!

I also came across the seemingly innocuous author Sidney Theodore Felstead who, as far as I know, simply wrote about the First World War spies. He too was wanted by the RSHA Amt IV (Gestapo), albeit section B (Sects & Churches). Felstead has an MI5 file at the National Archives and it's one of the ones I downloaded, so I'm going to have to take a look at it and see what he was up to...

While many of the entries were for Jews (Jude), there was a group of eleven individuals from the Petschek family which seemed rather odd. I'm not sure what this family did to antagonize the Nazi regime, but they were all wanted by RSHA Amt III (Domestic Intelligence) Section D (Economics, Industry & Commerce). A quick Google search and the family seems to have owned quite a large conglomeration of coal and other industries in Czechoslovakia, Poland, Germany and Austria. They resisted Aryanisation of their business... and obviously stepped on a few Nazi toes in the process. 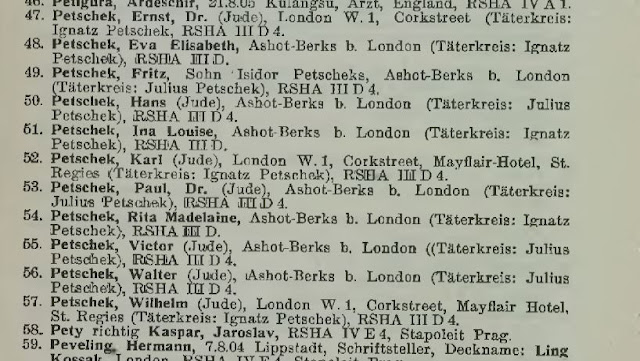 What was intriguing about the RSHA arrest list was the absence of certain names. I found no evidence of Stewart Menzies (MI6) (see below), Vernon Kell (MI5) nor any of the MI5 personalities I am familiar with (e.g. T.A. Robertson, R.W.G. Stephens, G.F. Sampson, Dick White, etc.) with one exception...

Years ago, while reading the court martial documents of Josef Jakobs, I had come across a statement made by Lt. Col. William Edward Hinchley-Cooke while he was being cross-examined by Josef's defense counsel:


White: I do not know when you were last in Germany?
Hinchley-Cooke: I am actually wanted in Germany. I have not been there for some time.

It was an intriguing comment and, not surprisingly, Hinchley-Cooke is listed in the RSHA's arrest list. As the public face of MI5 during the trial of German agents, it's not surprising that he was well known to the RSHA The booklet doesn't give his first name but does assign him the rank of Colonel and has him listed as the Leiter (head/director/chief) of MI5, which is quite fascinating. Naturally, Hinchley-Cooke was wanted by the RSHA Amt IV (Gestapo) Section E (Counter-Intelligence).

I had come across a reference several years ago which stated that the Germans could never find Hinchley-Cooke in Britain's Army List and so presumed him to be a police officer. I traced down that reference to a 2006 listing on the DNW auctioneers site when Hinchley-Cooke's medals were being sold. The medal write-up contained this paragraph:


Yet for all of M.I.5’s successes the Abwehr was rarely short of informants, a contention supported by documentation captured at the end of the War. One of the most startling discoveries was an enemy intelligence summary of the U.K. compiled by the R.H.S.A. [sic] in 1940, in readiness for “Operation Sea Lion”, a mass of top-secret information circulated within the 3rd Reich’s corridors of power under the title Informationsheft Grossbritannien. And among the “roll of honour” of known M.I.5 operatives was listed:


‘Lieutenant-Colonel Hinchley Cooke ... His name does not appear in the Army List so therefore he is presumed to be a police officer ... He wears glasses, is strong and has a fresh complexion. He has a friendly nature and speaks German fluently with a mixture of a Hamburg and Saxon accent’

As Nigel West so aptly concludes in MI5, ‘In the event of a German invasion there can be little doubt that the whole of the S.I.S. structure ... would have been quickly scooped up by the Gestapo.’

The comment from Nigel West would seem to jive with the number of individuals in the arrest list who were identified as working for the "ND" of Great Britain - the Nachrichtendienst or Intelligence Service (SIS).

The reference to the Informationsheft Grossbritannien in Hinchley-Cooke's medal write-up is intriguing. It is a companion document to the RSHA arrest list for the invasion. I haven't been able to find a digitized copy of this booklet and am adding it to my list for my next visit to the British Library when/if the pandemic releases its grip on international travel.

It does however appear that one John Erickson has produced a translation of the booklet entitled: Invasion 1940: The Nazi Invasion Plan for Britain by SS General Walter Schellenberg. Published in 2004, this book appears to be a translation of the Informationsheft and is available in some libraries in Vancouver which, unfortunately, are all closed and a ferry ride away. There are some second-hand copies available via Amazon and I may yet order a copy.