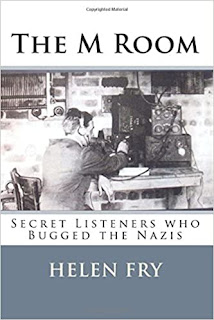 Background
I bought this book as an e-book two years ago. Last year, it was republished on Yale University Press with a different title (The Walls Have Ears: The Greatest Intelligence Operation of World War II). I haven't read the republished version, so all of my comments relate to the original version.

Summary
The impetus for this book seems to have been an encounter between the author and one of the "secret listeners" who used to work in the M (microphone) Room at Trent Park, an interrogation centre run by British military intelligence during the Second World War. This gentleman's tales sparked Fry to investigate the history of the M Room at this facility. Receiving many high-ranking German officers, Trent Park (a.k.a. Cockfoster's Internment Camp), the secret listeners were privy to many top secret revelations uttered by the Germans when they thought they were alone.

Review
While the topic is quite fascinating, I found the author's style to be a bit disjointed. There was no narrative flow and there was quite a bit of repetition. It read, in the main, like a dry historical text and could have been restructured to enhance the exciting nature of Fry's discovery. I could also have wished for a bit more context. Trent Park was not the only interrogation facility in which hidden microphones were used. Some reference to other facilities (e.g. London Cage, Camp 020) and their use of microphones would have been welcome.