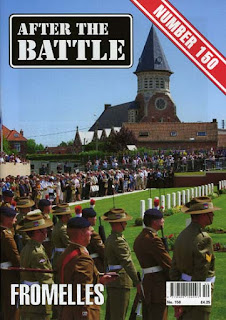 The Magazine Article
From the Editor, After the Battle, volume 150, Battle of Britain Prints International Ltd., 2010, page 53.

Summary
A full page spread (mostly photos) summarizing my visit to Ramsey, Huntingdonshire with Winston Ramsey. Includes photograph of me standing in the potato filed where Josef Jakobs landed, and in front of the Ramsey Police Station. Also a photograph of the envelope which contained Josef Jakobs' final letter to his wife, addressed to her at Rudolstädter Strasse 124. That building was bombed out in 1943 and there is a photograph of me standing in front of the rebuilt building. We had also visited the Ramsey Rural Museum but completely missed seeing the fragment of Josef's parachute on display in the museum.

I have, I think, now done blogs on all of the After the Battle issues that touch on the Josef Jakobs story - see below:

After the Battle - Volume 11 - 1976 - the classic piece on the Second World War spies executed in Britain, including a two page spread on Josef Jakobs

After the Battle - Volume 35 - 1982 - acknowledges the limitations under which Winston worked in gathering the information for Volume 11 and noting that, in light of new and better evidence, Josef Jakobs had not landed near North Stifford but rather near Ramsey. A revised Volume 11 was published.

After the Battle - Volume 72 - 1991 - includes extracts from the letter I wrote to Winston Ramsey in 1991 as well as the photograph of Josef that I sent to him.